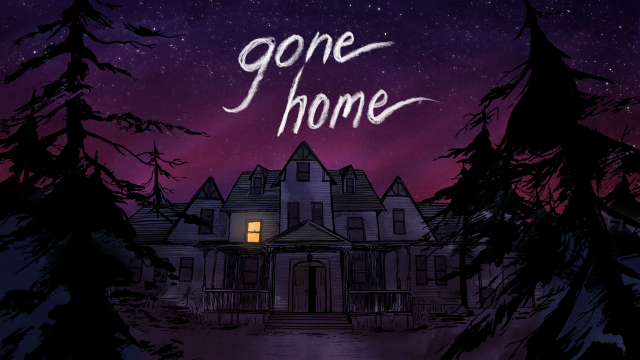 Spoilers ahead. Thou hath been warned.

There’s a lot to talk about in Gone Home, The Fullbright Company’s award-winning “story exploration video game.” The subversion of horror that it presents, the “is it really a game” argument, LGBT issues that it brings up, or any of the controversies surrounding it. But this is a transmedia blog, and so what I’m interested in is how the title makes use of multiple media platforms to make the player complicit in how the narrative unfolds.

Sorry for being long-winded on this one, but we’re talking about art, so I get to act all hi-falutin’.

There is music. There are journal entries. There are books. There’s fine art. The entire thing is wrapped in an interactive bow that the player unfolds. If people were allowed to walk through this kind of place in real life, haunted-house style, I’d be the first to say that this was an exercise in single-location short-form transmedia. So what does the fourth wall really take away from it being the experience?

Well, first of all, it makes you a character rather than yourself. As Kaitlin, you have “gone home” to your parents’ new house after some time abroad, only to find it empty. There’s an ominous note on the door from your sister and from there, the story unfolds as you explore the house and its many clues. There are hints of ghosts, the mystery behind a few hidden passages, secrets that both parents hide from one another, and a narrative string written by your sister that ties it all together. Will it unfold into joy or tragedy?

Notice that the narrative here isn’t really defined by the main character or player. Like Citizen Kane, we are being presented details of a story that we can only gleam through pinpricks in the firmament. Whereas Orson Welles’s masterpiece utilized the passive nature of film and captured reality, however, Gone Home forces us into the context. We are voyeurs, walking through a place that we have never really known, stumbling across unopened boxes and discarded manuscripts. We must invade this family’s privacy in order to continue. The player may not exactly have agency (the events of the story have already taken place) but in order to understand what has happened, he or she must be willing to break a lot of societal mores in order to continue, in the same way that the other characters have done.

Though this is hilariously subverted in the discovery of a passionate note that the character refuses to read, this does tie into one of the main criticisms leveled of the title: its strict linearity. Sure, you can wander around the house and discover secondary or tertiary bits of info, but the clues are pretty much ducks in a row when it comes to the main plot. A to B to C and all the way to Z. It’s not exactly Mass Effect 3, or even Myst.

Yet it is this linearity that intrigues me most. We never see any other character in the story. We hear them, see evidence of their lives, and try to understand them from the clues that are presented. Players must put these pieces together in their minds to form the ideas that support the foundation of the game’s themes. Family. Dreams. Anger. Impotence (for lack of a better term). And, of course, home.

Here is where the title is most ironic, in the traditional sense of the word (“use of word for non-literal meaning”). No one is actually going to a house. The parents are out on a weekend retreat, the old owner of the house is dead, and the sister… well, I won’t ruin that. The point is that characters are instead going to that place that means safety, security, and all those bits that make up what was, is, and will be a home.

This includes the player. Look to any number of reviews and see how it creates a sense of nostalgia for an earlier time. The setting is 1995 in Oregon, at a time that is near and dear to a lot of the gaming world. Just as Katie stumbles over Sam’s notes, journal entries, tapes, and what-not, so too do we as players make a connection with our past.

No doubt that this aspect will engage younger players less. No matter. Young love. Rebellion. Music. Clashes with authority. Dying friendships. All are just as equally important to the understanding of home, regardless of age.

I do not think Gone Home is a perfect game, but this drive to understand and to put the gamer’s mind as the focal point of the narrative is engaging. It also works due to its brief game length. With completion coming in at a hair under two hours, it’s short enough to never lose the conceit to boredom. That may not justify the cost to those who are wary of experimentation but I’d recommend getting over your hesitation. Buy it in a bundle or wait until it’s on sale if you have to, then drop me a line. While Gone Home puts a premium on what is left unsaid, we’re not in a game, and I’d love to hear your thoughts on it.